Books as building blocks, not only to create a person, but a writer. Recently my fellow author Joost Uitdehaag invited me on facebook to participate in a challenge: to share, each day, for seven days, the cover of a book that is or has been important to me. No text, no explanation. Just the cover.

Granted, a good cover can tell a lot, but here it’s all about the personal aspect. The story behind the book: why is it so important to you, specifically?

So I decided to go about this challenge a little differently. Instead of spamming my facebook circle with a cover each day – which is fun in its own rights – I will give you seven carefully selected stories right here.

The basis for this selection: these are books and series that not only moved me as a reader, but also put me on the path of becoming a writer. And for each book or series I added a writing lesson that I got from it. 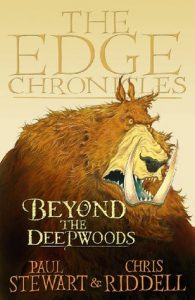 Yes. Okay. Not a shocker. But the Edge Chronicles were the novels that drew an eleven-year-old me back to fantasy during some dark childhood days. I had just read The Lord of the Rings and, convinced I had already had the best of the genre, I fell into a Carry Slee-filled literal void. As I said: dark days. But the world Paul Stewart and Chris Riddell, writer and artist, created, was so much fun, so exciting, adventurous, rich. I wanted more. I wanted to read about Sanctaphrax, sky pirates, stone pilots… and all of a sudden I was hooked on fantasy again. And that tiny voice came whispering… what would it be like, to create worlds of my own?

2. Characters can be flawed. 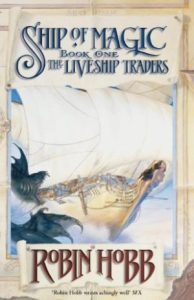 I was twelve, maybe thirteen years old when I first read Robin Hobb. The Liveship Traders novels were practically pushed into my arms by my father. For good reasons. Hobb turned out not only to be a master storyteller, intertwining storylines that seemed miles apart, and penning down a world that felt unique and authentic both. She also showed that characters, even main characters, can be less than likeable. They can be spoilt brats. They can be murderous, ambituous pirates haunted by childhood trauma. Drug-addled noblemen fallen from grace. And still it is possible, as a reader, to feel sympathy for these characters. Or rather: it is possible for the author to instill this sense of sympathy.

Jim Butcher once said in an interview that he started the Codex Alera-series as part of a bet. He wanted to convince a fellow author that a bad idea, executed well, would always trump a good idea, executed poorly. And so this fellow author gave him not one, but two bad ideas to combine and turn into a novel: the lost legion-concept and…well… pokémon. Sure enough: if you look at the Codex Alera-novels, they are indeed about the descendants of a legion that stumbled into a fantasy setting. And to survive these descendants make use of elementary monsters… much like pokémon. Oddly enough, the books work. Because Butcher crafts his world consistently, convincingly. And because the driving force of this book – tons of action – is inked by someone who actually understands martial arts (unlike your mill-of-the-run fantasy author, who has never properly used a sword).

4. The quaintness of the ugly, naked truth. 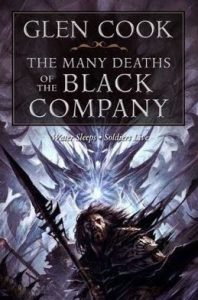 If Hobb taught me characters can be flawed, Glenn Cook took the concept one step further: his Black Company-world is downright miserable. Absolute evil exists, but the closest we get to good is a bunch of soldiers stubbornly persisting to the morally grey bits of the ethical scale, with frequent excursions to the blacker end. The members of the Black Company know no family but eachother, and while away the day in the dirty, ignominous act of warfare. Cook takes away the epic, the heroic, and gives in return a crew of cynical bastards. Of course, I already wrote about this series’ influence on The Wanderers here. 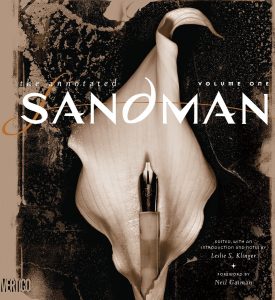 Neil Gaimans wrote fine books in American Gods, Neverwhere and The Ocean at the End of the Lane. Gaiman excells, however, in his earlier work as a comics writer. Sandman, whose four hefty annotated volumes form the foundation that hold my book case upright, offers a view of our world(s) through the eyes of Dream. He is one of seven ‘Endless’ aspects of humankind, next to Death, Desire, Destruction, etc..Within Sandman‘s seventy-five issues, Gaiman drags us through a tempest of literary violence: a perfectly balanced blend of history, satire, mythology, pop culture… all of it rife with the encyclopaedic play on literature that Gaiman so enjoys. If ever there was a better instructor in the joys of mixing and matching genres, I have yet to meet it. 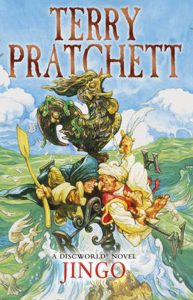 I try to get some writing done each day. A thousand words, preferably. Sometimes I get there, sometimes I don’t. Writing isn’t always easy, so let it at least, for the most part, be enjoyable. One author who took this to heart was the late Sir Terry Pratchett. A writing machine of a man who churned out not only his Discworld Novels (41, not counting spin-offs) but dozens of other books as well, at a rate of two books a year. And every book by his hand I’ve read, has gotten fun written all over it. Not only my enjoyment in the reading, but also Pratchetts pleasure in the writing. His witticisms, his plays on clichés and genres and his parodying – without ever losing heart and humanity – of everything that makes our world so absurd, stupid and beautiful at the same time. I hope to always keep writing with that same agree of enjoyment. That way, I can at least endeavour to emulate sir Pratchett’s productivity, if not his succes. 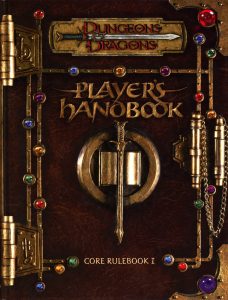 Alright, this is me cheating a bit. Dungeons and Dragons’ 3.5th edition Player’s Handbook (PHB) is not a fantasy novel. It is, instead, a tome filled with rules for the pen & paper roleplaying game that kept me occupied on saturday nights throughout my adolescense. While other boys my age were looking for encounters with the fairer sex, I had encounters of quite a different kind, pretending I was a Dwarf or Half-Orc hitting hypothetical foes with hypothetical weaponry. No regrets: eventually I stumbled into the fairer sex, and all those years of playing Dungeons & Dragons turned out to be enormously useful. Especially later on, in the role of Dungeon Master, where I laid down solid groundworks for the art of creating narratives within the fantasy-spectrum. Most importantly, however, Dungeons & Dragons taught me that it doesn’t matter if you’re cool or not. So long as you do whatever you think is cool, with people who gravitate towards the same sort of coolness.