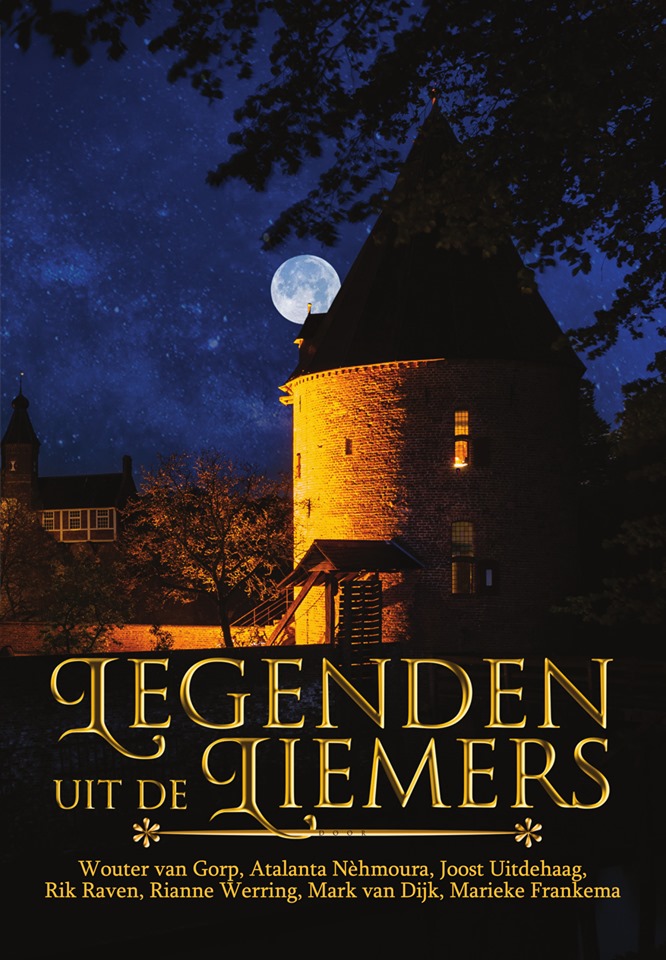 Last Sunday, second of June 2019, finally saw the launch of a book long in the making: at the Buitenblik Festival in Zevenaar, near the water which drowned an entire village, under the most fabulously decorated tree to be found out of season, the seven authors of Nimisa presented their short story collection Legenden uit de Liemers. In creating this anthology, Nimisa worked closely with local book store Rebers. Inside this book, you can find seven local legends that sum up the mythological richness of the city and its surrounding area. And each story was crafted or re-told with loving dedication by one of us authors.

Legends, such as those from the Liemers, only live and survive through their telling and retelling. They need storytellers able to grasp the essence of the tale, who know how to wrap it in new cloth and hand it over to a new audience, to future generations. But it would be naive to believe the storyteller altruistic in his telling. After all, what makes a legend?

Latin teaches us that the word legenda literally means: ‘that which must be read’. Originally, the term was coined specifically for the biographies of martyrs and saints : the lives of holy men, hand-picked by God, meant to spread the good word by their deeds and – through the legenda – by words.

Just one example of such a Christian ‘legend’ is that of Saint George, better known as ‘Georgie, you know, the one with the Dragon’, a tale which stems from the Legenda aurea. A knight errant, saving the life of the princess whose path he crosses, and ridding an entire kingdom of the dragon who’s been eating their kids and cattle. Almost as an afterthought – but we know it is not – he baptizes the entire community. This is the Christian, but not the original version of this tale: the origin of ‘St. George and the Dragon’ lies in a far older tale: a Greek myth. About the hero Perseus rescuing Andromeda from a dragon before marrying her.

In ‘George and the Dragon’ there is not even any talk of marriage. The princess is only there as a symbol of purity – about to be sacrificed to a devil-like dragon by a corrupted community. Motives and themes are rearranged to make the story into something the storyteller needs: a cautionary tale about the demands of the devil, as well as a promise of the Grace of God.

Legends do live through their continued telling, it appears. They ripen, mature, breathe, but – thankfully – never achieve a finite state. Every teller adds his own spice to the already heady brew of mythology. And every teller has his own purposes in the telling, his own agenda. It would be foolish to think of the storyteller as neutral, unbiased.

And yes, this is me telling you this, a storyteller. The irony isn’t lost on me. And yet I urge everyone of you with a love for local legends to get a copy of Legenden uit de Liemers. You’ll love it. Trust me 😉

Legenden uit de Liemers appears on 12-06-2019 at Nimisa Publishing House, but can already be bought at book store Rebers and bol.com. More information on the project can be found here.